Top of the day blog readers and thank you for joining us on our journey. We recently visited the gorgeous foothills of North Carolina, Wilkesboro to be exact, and had such a full itinerary we need several blog posts to talk about our experiences.

Wilkesboro is a about an hours drive from the queen city, Charlotte, and just a little over two hours from the hustle and bustle of Raleigh, North Carolina, making this small town a fantastic weekend getaway or mini-vacation. It is known as the foothills of the picturesque Blue Ridge and Brushy Mountains of North Carolina, and we did not miss out on those views – just look at the views we woke up to this morning.

Many people may only know Wilkesboro as a town they drive through on the way to popular ski resorts in Boone and Blowing Rock, or as the home of MerleFest, an annual music festival which draws more than 80,000 people. However, Wilkesboro also contains a gem of a historic downtown.  Recently, several million dollars have been poured into the redevelopment, renovation and revitalization of this historic downtown. In this newly revitalized downtown, you will find renewed passion for “local” engagement – buy local, eat local, shop local. And so we devoted an entire day to skim the surface of the new-and-improved Downtown Wilkesboro, home to quaint local shops, restaurants and a bit of history.

Note the huge mural of Doc Watson himself, which lines the side of Sweet Smiles Candy Store right on Main and Bridge Streets.  You will definitely want to Instagram this. 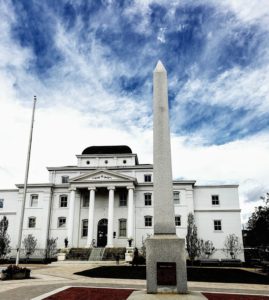 The day began as we rose early for our first exploration, the Wilkes Heritage Museum, which is a self-guided tour – admission is just $6 and children 5 and under are free. The two levels of the museum are divided into display rooms; some featuring history on Nascar and racing, early settlers, moonshine, communications, a very pretty pottery exhibit along with additional rooms, and as we were the only ones in the museum at the moment, we took our time to really examine these rooms in depth. 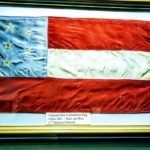 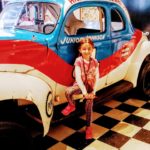 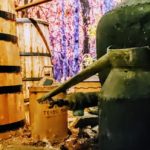 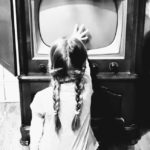 This museum is impeccably kept and has many treasures, both inside and out. Within the confines of its walls, on the second level, is a treat for Americana music enthusiasts, a little hidden gem, the Blue Ridge Music Hall of Fame. Nationally known artists such as Doc Watson, Dolly Parton, Tony Rice among many others, have been inducted into this hall of fame. There is even a small performing stage and reception area. Definitely not something I expected to see as part of the museum. Included with the admission price is a guided tour of the Old Wilkes Jail and the Robert Cleveland House. 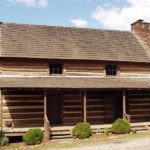 Just down the street sits the Robert Cleveland Log House, built about 1779, which is one of the oldest dwellings in Wilkes County. It is extremely well-preserved to showcase life 200 years ago in Appalachia. It has had some modifications (such as windows added to the 2nd floor, making it easier for touring). Next to that structure, is The Old Wilkes jail, built in 1859 and in operation until 1915, and considered to be one of the most authentically preserved 19th century buildings in the state. But is it most famous for housing some interesting characters, most notably, Tom Dooley, prior to his execution.

We had worked up an appetite and we walked not more than 100 feet to Dooley’s Grill and Tavern, in essence, it is a stone’s throw away from the museum. The current owners serve up Traditional American fare, anything from pizzas, burgers, salads and home made desserts, along with a variety of gluten-free options.. And did I mention beer? If not, please note they have a several-page beer menu dedicated to their sixty+ beer options. Anyone that knows me, KNOWS I DO NOT DRINK beer, well, they made a beerliever outa me, no pun intended. 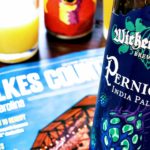 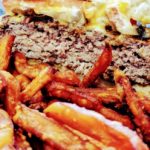 Once the buzz had kicked in (2nd sip I’d guess), I perused the menu, but I knew already what I would be ordering. My go-to staple is a burger, at least I can be a legitimate critic because I have tasted so many in so many places, and Dooley’s burger deserved it’s own toast. My local, fresh-ground all-natural meat burger was cooked to perfection, my specification (medium I might add), and quite tasty on the taste buds. So for those who find everything better on a bun, this is your spot and with several variations to choose from, including size! I can see why it is so highly rated on Yelp. Top it all off with a very cool atmosphere and very good service (I might add), Dooley’s is a must when visiting or just driving through. And no matter how you say it – Cheers! Salute! Prost! L’chaim, this American-fare tavern is both good on the taste buds and on your wallet and definitely a must-try or a return visit. 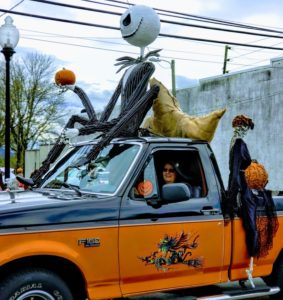 Once we were full of grub,we grabbed our folding chairs and plopped right on Main Street for a Zombie Halloween Parade (I kept thinking to myself, wow… the Town went all out for our trip to Wilkes, they are putting on a really good show, and we were taking it all in). Bella, and the other little children, were thrilled as the floats came by with frightful looking zombies handing out free candy. Tony and I were thrilled too, because we were a bit buzzed and the blue sky and sunshine gave us a reason to put on those sunglasses on, sit back and take in the small-town America vibe. It is always fun to people watch and hear the slang used. Country slang has a ‘twang of it own. I had to stop myself from incorporating it into my cubanish accent, might sound kind of funny to some. It was a quick 30-minute repose before we were off for more downtown fun. 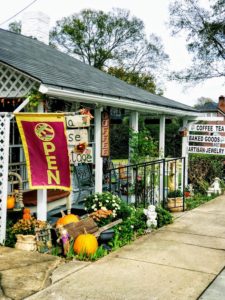 With the revitalization and shop-local enthusiasm sweeping the nation, Wilkesboro now has a plethora of small local shops where you can lose yourself in boutique finds, antiques, home made crafts, jewelry and my personal favorite, soaps and creams. Our first stop was to Aunt B’s where a hidden stairway takes you to the 2nd story overflowing with knickknacks. For those into hats, come by, play dress up and be ready to spend some time here (and bring some spending money). I did not leave empty handed from our next stop, Bella Rose Cottage, I had to stop myself from purchasing too much for I packed my suitcases (yes plural) and not one more pound would be allowed for free, eeek.

Bag in hand, I was on my way to see some furry friends at Waggles Pet Supply and Dog Wash and I was in 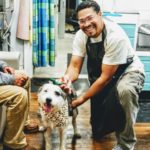 luck, there were a few furry friends getting the gold-star treatment in the back of the store. It is always fun to see and play with man’s best friends, and of course, Bella loved every minute of it. The desire for a new shopping experience is experienced with personalization and that personal touch that the Downtown Wilkesboro Merchants deliver. For a full list of Wilkesboro’s Downtown shops, click here. The hour and a half flew and I wanted more time to peruse more through the local stores; the owners were inviting and the items were interesting. This is on my list to do (again) on my next visit. 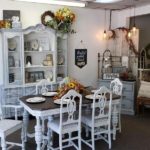 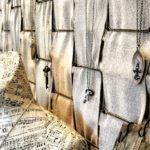 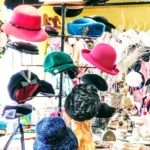 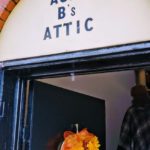 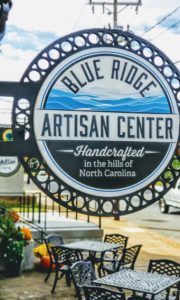 Although not in a hurry, we shimmied over to the brand-spanking new Blue Ridge Artisan’s Center – a beautifully restored building housing the creative spirit of the Northwest North Carolina people. They support and promote local and regional artists and artisans, musicians and performing artists. This is a true gem in the heart of Wilkesboro and the heart of their downtown. The building itself is beautiful enough to fight for calendar space as a wedding venue; it is an old Historic Federal Courthouse and Post Office. The Center also plays an integral role in yet another music festival, Carolina in the Fall, as it hosts musical guests in its outside courtyard. And it will soon house the Artisan Cafe, featuring a selection of farm to table offerings. Anita Cranston (Center Director), gave us a grand tour, featuring a coffee break sit down cup of their imported Honduran coffee… 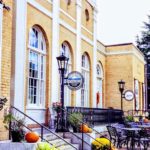 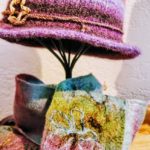 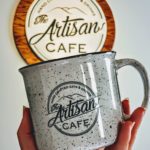 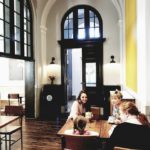 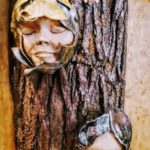 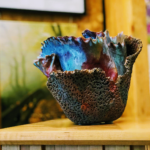 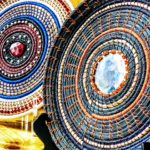 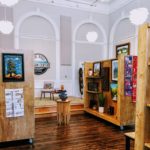 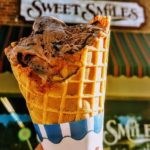 To finish off the day, so we thought, we headed to Sweet Smiles for a scoop of ice cream to enjoy while watching the cars drive past us on Main Street. But once again, there was yet another happening: Wilkes Central High School’s 40-year reunion at the Carolina West Wireless’ Community Commons, (also home to Carolina in the Fall, another annual music event). The music band was totally rocking it out and so we made our way to jam out. While there, we even met the Mayor of Wilkesboro, Mr. Mike Inscore. Ok, so now we are bonafide Wilkes County royalty.

It was past 5pm now, and I was afraid that if we walked even another block, we would find another store or event going on, I was exhausted, yet pleased with the days events. Wilkesboro had worn me out, in a good way. Plus, we had a ghost tour at night and needed to tidy up a bit.

Drove up to our home stay in the Brushy Mountains and we were blessed to witness such a beautiful sunset. The view from the deck was breathtaking, as far as to Grandfather Mountain. I was almost blinded by her light, it was worth it.

The ghost tour, part of the Wilkes Heritage Museum, seemed to be more history than ghost. Maybe it was the 40-year high school reunion and the rocking band playing their music which took away from the eeriness. Nonetheless, we had an excuse to visit Dooley’s again for more of that AZZ Clown beer. Needless to say, the ghost tour, turned out to be a hoot and quite entertaining, at least for us.

The day, and night, had finally come to an end. I did not know that Wilkesboro had so much to offer, and we did not even skim the surface. This was a great addition to our long-weekend getaway to North Carolina, and we are already planning a return trip. Perhaps in April during MerleFest, America’s top roots based music festival… and making Wilkesboro our home base again. Thank you Wilkes, we LOVE you.

7 thoughts on “Support the Makers. Local Fun in Wilkesboro, NC”